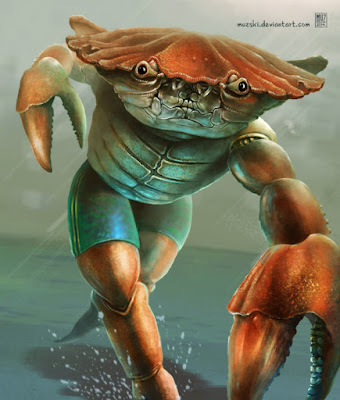 Have I written about Big Motherfuckin' Crab Truckers, the one-page rpg written by Gregor Hutton, tha author of 3:16 Carnage among the Stars, and others?

No? About time, then.

So, BMFCT is a game where you play… exactly that, big motherfuckin' crab truckers. You pick a class (Driver, Fighter, Lifter or Something else), and there you go. Classes in BMFCT are a cluster of four traits, with one trait being predefined: The Driver has a trait called, you might have guessed it, 'Drive!', the Fighter has one called 'Fight!', and so on. Fill the rest of the slots with your own traits.

Whenever you want to do something risky, AND someone at the table says 'no fuckin way!', roll 2d8, and add 1d8 for every relevant advantage or ttait you might have. Pick the two highest dice, and add them together. The referee does the same, but he always only gets 2d8. Higher roll wins.

Those are the rules in a nutshell.

This is extremely interesting: You have (usually) 2d8+bonus (dice), and an opposed roll.

Guess what system works the same? Yes. My Landshut rules. The only difference is that we're using 2d6 and add a bonus number instead of rolling with advantage, but that's marginal. Fact is, it almost looks like BMFCT and Landshut are twins, separated at birth.

I'm thinking to include that character class descriptions in the Landshut rules because they make it easier for people who have never played an rpg to get into the groove.

Paladin: You are a fighter for the Side of Light. You are one of the Good guys. You possess a divine determination to eliminate evil. You get Smite Evil!, and three other traits.

Hobbit Chef: Aaaaah! Isn't this delicious? Come, try some of my new chocolate-rum pudding, it'll seduce you like one of the ladies down at the Hairy Feet Inn. You get Turn Everything Into A Good Meal!, and three other traits.

Wild Hog Rider: Your clan has been on this land forever. You may be only half as tall as them hoomins, but by the Gods!, your hog can be a fierce bloodthirsty beast on the battlefield. You get Warhog!, and three other traits.
- June 28, 2020