Stop the presses! These rules are positively Over the Edge 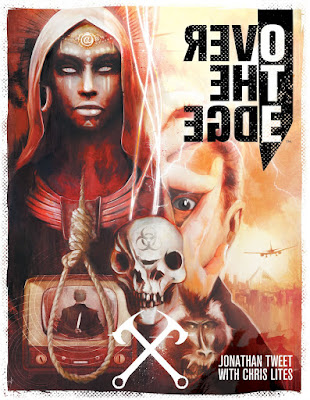 When the 3rd edition of "Over the Edge" hit the shelves, I bought the hardcover immediately. Today, I finally started reading it. I've loved every edition of OtE, and this latest one is no exception. Gawd, I loves me some Over the Edge!

Third Edition has the best rules system I can imagine. This includes, and that's not particularly easy for me to say, my Landshut rules.

What's so special about it?

A few highlights, neatly packed into a nutshell:


It's absolutely amazing how much narrative punch this little rules engine is packing.

Your rhino capoeira ex-soldier is surprised by 4 experienced barroom brawlers. He is competence level 2, but the goons are no slouches either (and there's four of them). The ref says that's a difference of 1 in the goons' favor – and he can force one reroll on you if he doesn't like your dice result.

You narrate how your rhino soldier goes in attack-mode almost instantly, after all, that's what he has been trained for half his life. Taking initiative means you have to roll 7 or more to defeat the goons. You roll... a 4 and a 1: 5. Oof. That's a failure, and because the ref feels it might be appropriate, he forces the reroll on you, saying "Hey choomba, please reroll the 4". This move is NASTY because she's taking the "good twist" (4, remember?) away from you. You roll the die again, and: score a 2, for a total of 3. That's a really, really bad defeat, your soldier is getting hurt really badly, possibly with fatal consequences.

Replace this conflict with anything you want. It'll work, and it'll be rich and narrative and interesting and as crazy and bad and good as you want it to be. So so so good.

Now, I finally KNOW what system I'll be using for our next games. Thank you, Jon. Thank you, Chris.